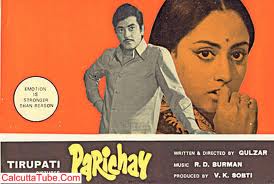 This movie remind me of Hollywood oldies,"To Sir, With Love" in the lines of teacher eventful struggles to counter beastly students. However I saw Parichay long before than TSWL. Like every other movie from the bouquet of Sampooran Singh Kalra i.e Gulzar Saheb, this movie is also soothing & refreshing just like melodious narration of a nicely-written poem. When you're sitting under the tree watching the clouds having pen in hand and winds of ideas inside your head, you create movies like these. I mean he always leave that Gulzary-impact in all his movies. 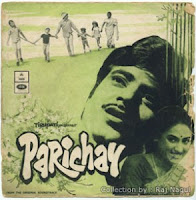 Parichay is inspired from Hollywood movie Sound of the music, but not an exact copy of original. And still you can easily feel the Gulzary-soul inside every frame of Parichay. His movies has a simplicity like Hrishikesh Mukherjee & Literary-colors like Basu Chatterjee's creations. But apart from that, they have their whole new universe of beautiful moments captured within the vicinity of 70 mm screen celluloid. He'd been choosy in selecting the canvas for portraying his cinema, and created gems like Angoor, Aandhi, Khooshboo, Ijaazat etc.


Well, my favorite one is undoubtedly Angoor. Though it was also an adaptation of Shakespeare play Comedy of Errors. And one more important thing about his movies, that he was not making movies but always tried to tell the stories. And thats the mark of a good storyteller, you dont crib for making hotch-potch hero-heroine dramas. His stories has always been the real hero of his movies. But if you'll like to chose the actor, the common player was ofcourse legendary Sanjeev Kumar. I've never seen Sanjeev Kumar so engrossed in the charachters as in Gulzar movies. In Parichay, he did a guest apperance role, but what a lasting impression his unmatched expressions and refined dialogue delivery has left. Truly, a genius of cinema. 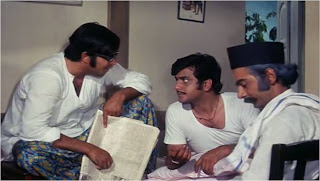 Well, Talking about Parichay, the movie is about the Parichay(introduction) of a strict Old Man Rai Saheb (Pran) to his ultra-naughty grand childrens. Rai Saheb was a retired military person, an aristocratic man of principles. Pran really played this charachter with Panache. And the classy introducer who led this inroduction was none other than Jumping-jack Jeetendra. Well, in this movie he has not been involved in his dancing histrionics. And interestingly, he used to have his "Second Track" always switched on for humour. In that second track he use to have parallel thoughts running inside his head in contrast to the situation faced by him. In this movie, he played a Tutor to the army of these pranksters students. The Army consists of Jaya Bhaduri as Rama, the eldest one among the devils. Rest, there were two teenage kids Ajay & Vijay, with two cute little ones, Meeta & Sanju. 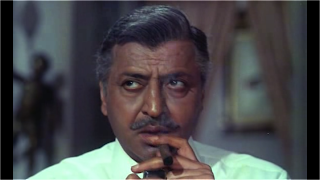 I think the youngest one Sanju played by Master Raju was the best treat among the rest. I still remember that I first watched this movie with my family on Doordarshan way back in early nineties, and even then it was a similar treat for me. Especially the histrionics of Rai Saheb's servant Asrani, who use to tell Ravi about the strict rules of Rai Saheb's mansion. That nobody should sing songs, laugh aloud, or even avoiding noise of shoes, hilarious. His funny one-liners like "Hasna ho to Jungle ki taraf nikal liyo" was really a pot-boiler & even today pings waves of laughter in my belly. 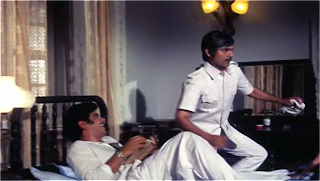 So the attitude of kids was the major problem for ageing Rai Saheb, as they had decided to drive away every teacher who tried to make them learn something. Underneath this arrogance and indisciplinary behavior of kids, was buried an indigestible truth about Rai Saheb's son Nilesh's death. Children thought Rai Saheb to be the prime reason for their father's untimely death under the petty circumstances of poverty.Nilesh (Sanjeev Kumar) was a talented musician, who always got criticism from his father for his chosen profession. And ultimately this led to his making distance from his strict father. And he left the home for studying in the city and pursuing his dream for music. 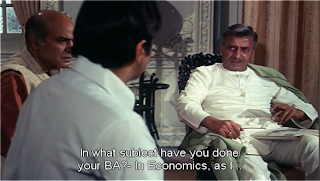 Nilesh returned from city marrying his Guru's daughter due to the demise of his Guru. But he didn't received a good reception from his father and was asked to make life on his own, with his own money. Rai Saheb clearly states, that in his house, he has to live according to his rules. And heart-broken Nilesh left the home for making life of his own. After that, Father & son only met once that also through a letter, 17 years later. Nilesh died of cancer, and children were sent to their paternal grandfather Rai Saheb. But Rama always had that vengeance against Rai Saheb for not taking care of his ailing son in his last moments. 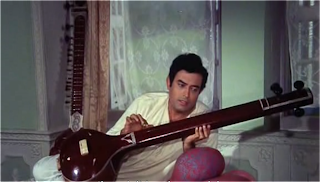 And that fueled fire in her rebellion approach towards every rules & discipline of Rai Saheb Empire. With her, all the other ones followed blindly. They also had to suffer corporal punishments for their acts by their Aunt Sati Devi(Veena) every now & then. The ferocious kids never allowed any one to enter into their space, not even the rapid changing teachers, who were always driven away by their scary pranks. The movie started with a prank with their teacher Ceshto Mukherjee, who ran away from the mansion due to the ghost-prank using Candle-on-a-tortoise in dark, it was damn funny bathed in its own Ceshto-flavour. 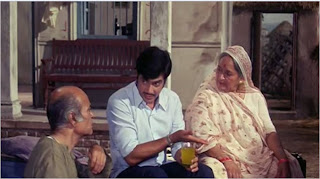 Finally, Rai Saheb somehow found a solid answer to the children in form of Ravi(Jeetendra). He was in need of good job, but no good job was coming his way. Then his maternal uncle, AK Hangal wrote him about a job in Rai Saheb house to teach these kids. His friend Amit (Vinod Khanna) suggested him to take this job till he finds the right one. And thus, in order pay their bills, and to sustain their dwelling in Lodge, Ravi decided to fetch this job with both hands. Then the audience gets blessed with a eternal Kishore Kumar-gem of a song, Musafir Hoon Yaaron, composed beautifully by Gulzar Music Chief Shri RD Burman !! 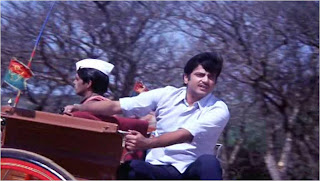 So, Ravi traveled to his Uncle's town to accept this job offer. Even though his Aunt, played by funny Leela Mishra warned him to not accept this dangerous job offer, he was able to prove her wrong. He was smart enough to cope up with the kids series of painful annoying pranks, and he kept patience till he broke the ice with them through his gentle manner & intelligent approach of handling their feelings. And to do that he started with the commander of the army, Rama. They eventually fallen in love with each other. Ravi played a major role in introducing the real self of children to Rai Saheb, and real self of Rai Saheb to children. Rai Saheb finally laughed & enjoyed after so many years. Salute to a classic movie made by a classy poet.

Today I saw "To Sir, With Love"...and Gulzar might be inspired from this movie for Parichay...but in his own classy way.