Recently we've been surrounded by the several creative works imbibed with the cults of 70s & 80s, trend started from Om Shanti Om, Action Replay till Dirty Picture, to name the few. We've also witnessed the avalanche of remakes one after another, some inspiration, dedication and some tribulations (Like Aag) as well. But there has been a common unsaid creative pact made within the film making fraternity, to inject a feel of retro, whether in the scripts, locations, actors, styles of yesteryears art of celluloid. Its a common phenomenon these days. 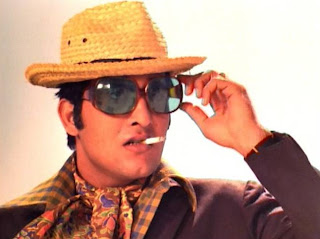 Within these Cult-books of 70s era, Vinod Khanna was a chapter which is one of the most popular & the most incomplete chapter. His some of the popular recent mention in the cinema being- Abhay Deol character in 'Oye Lucky Lucky Oye' who use to flaunt himself in Vinod Khanna style, even the film starts with Vinod Khanna song, 'Chahiye Thoda Pyaar..Thoda Pyar Chahiye' (Movie: Lahu Ke Do Rang). Apart from that, I like the recent trailer of much-awaited Saif thriller, Agent Vinod, in which to hide his identity he call himself as Vinod....Vinod Khanna. 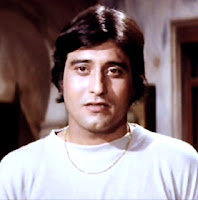 This is a well-known fact that he was the most stylish superstar of that era, and probably the only one to give neck-to-neck competition to the Ruler of 70s, Amitabh Bachchan. Some even says that he had literally overtook Amitabh in every sense when he suddenly took the retirement from the films and bollywood at the peak of his career. He became a strict follower of spiritual leader Rajaneesh (OSHO) and left the industry in form of self-imposed exile to live in Rajaneeshpuram city in Antelope, Oregon area of America. And thus, after Rajesh Khanna's end of stardom, the only threat for the numero uno status to Amitabh lost forever in the garb of spiritual inclinations. 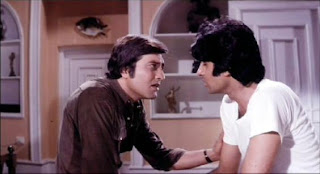 And Vinod Khanna not just gambled his career, but even his family & friends on his way to experience the spiritual transformation and quest of inner peace. Infact, nobody knew what he did in his 8 years of time spent in Rajaneeshpuram City. Then he returned after a decade to join the bollywood again, and started his second inning, while his marriage was on the rocks until his divorce. Then he got married again 1990 & then further became an MP in late 90s. But his charisma, charm & tough exterior always won the hearts of the audience. Even though he had many self-imposed exiles on himself, but he maintained his royal-ness and turned more spiritual & intellectual personally, as shown by him in various interviews. He's now serving as MP of Gurdaspur constituency. He was always called as an elusive star with a rebel attitude, he always followed what he believed in, once he made up his mind it was hard to refrain him from doing it. 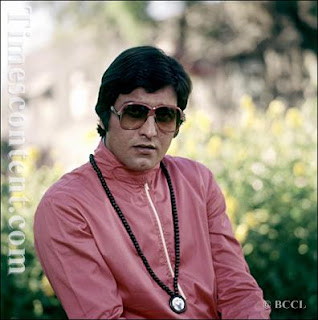 I can relate with his inclinations of exile as even I had once made my mind to have this experience of peace and self-introduction, though I was comparitively young and not even a successful superstar. And I got counseled by my annoyed friends & colleagues about the futility of that action on my own life and my family. I myself gave it a thought and found it quite amateurish in nature. I found that inner salvation can be experienced by doing one's Karma in the most genuine way and by following one's duties towards Self, family & society. Though I'm still in this diverged pathways, analyzing my path between the two. I found my father remarks so useful, that First show that you can gain, then express your desire to renounce. When there is nothing what you have attained in life, nothing you've enjoyed, How you can feel the pain or joy of losing it for spiritual or delusion sake. I liked the idea, and it helped me a lot. Even in my doing MBA & later job, as I at least proved my family, my father in particular, that I have some capability. 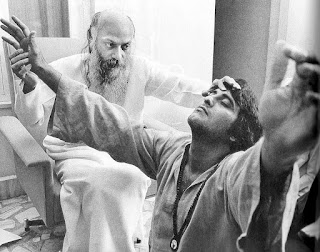 But coming back to Vinod Khanna, I would have wished he must have continued his career, the heights of oneness and peace can be attained in your chosen trade too, like A.R Rehman, I think he always connect to the one while composing or producing music. Same way I feel for Tendulkar in cricket. So achieving the oneness in Karma can be a better notion then exile. But god knows what was best for him. As post-emergency quality of cinema hindered seriously when films sole motive became gaining money whether by vulgarity, plagriasm or some household daily-soaps type movies for VCR generation. And later after his exile he too joined that third class cinema bandwagon saying NO to his guru Rajaneesh for handling Pune Ashram of OSHO.

But anyways Salute to his courage & conviction of sacrificing his all for his purpose & vision. That was surely not for publicity sake like many others. He had paid a great price for that decision both personally & professionally. He might have actually became the Superstar of the millennium instead of Mr Big B, But who knows if that would have mattered to him or his inner peace eventually. He would always be remembered as a great actor & star of bollywood despite all the drama underlying his life story.

I was around in the 70s, in many parts of India, Amitabh Bachchan became a superstar to the common man way into the 80s after Vinod Khanna left the shores. Between the two of them,Vinod Khanna had a ready and greater reach to the educated middle class, the cultured sections of the society, none ever got grounded or chided for watching a Vinod Khanna film those days, while an Amitabh Bachchan film was a strict no no from elders. I personally feel that Vinod Khanna is a better actor than most other superstars.