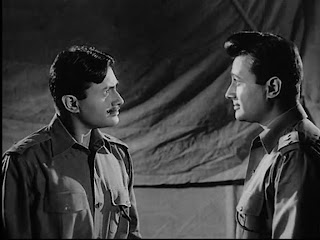 This film is undoubtedly blessed with one of the most mesmerizing songs of the century, and I've no qualms in admitting that this movie is a rare species where music overtakes every other aspect of the movie by storm. I mean who can forget the age-old classic "Mai Zindagi Ka Saath Nibhata Chala Gaya". This song is deep engraved into my soul with all its wisdom of lyrics withheld in it realms. It shows the way to live life at the fullest, and to portray this, who could be the better choice than the legendary Dev Anand himself. In a way, we can sum up the greatness of this movie by only this song, and we have no obligation to touch the other songs or aspects of this classic. The way this song was picturized on Dev Sahab, truly impeccable & flawless. And Mohd Rafi's voice, lyrics of Sahir Ludhianvi & music of Jai Dev were proved to be an eternal combination. I mean no words for Sahir sahab, hats off to this God of lyricism. The Film was released in 1961, and both technically, and execution wise, ahead of its time. One thing I observed about Navketan banner, their penchant for War theme, and working with almost the same team, Like Sahir Ludhianvi & musical team, Gajanand Jagirdar who played important charachter Bhola in Guide, is totally different here as a rich Industrialist. Even Rashid khan, who was literally in every movie of Dev Anand I recall of 50s, whether it's Taxi Driver, Nau Do Gyarah, or Hum Dono. He always played small cameo in Navketan banner. Let's come back to HD- Hum Dono. 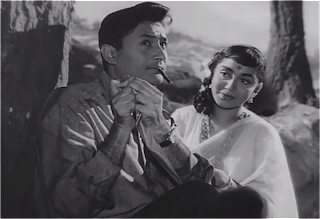 The story starts with another gem of a song, "Abhi Na Jao Chhod Kar", which lovers even till date recites to stop their beloved ones. A charming bachelor Anand was a jobless Romeo of the beautiful Rich Juliet, Meeta (Sadhana). He was educated but still searching for jobs giving interviews every now & then. But his real focus was on this sweet simple girl, who was quite grounded and has no signs of rude elites. She was the only daughter of this Rich Industrialist(Gajanand Jagirdar), who has built the Empire from the scratch. And he wasn't happy with Meeta choosing jobless Anand as her life partner. So to ensure the same, he get ready to meet the young lad. Poor Anand came all prepared, neatly-dressed (he was looking awesome), even leaving his interview for the meeting with her father. Old man explained the vast difference between Meeta & Anand fortunes in typical heroine-dad style. He insulted Anand on the very account of Love for which he was bargaining, by mentioning how the love for same Meeta, inspired him to create the whole empire, and he cannot even fetch a job of 100 Rs for the same. Shocked & totally down Anand leave the mansion immediately and get drowned into deep introspection, which was shown as Dev Anand walking fast-paced with head down only to look up to the board with his new course of life written, JOIN ARMY. 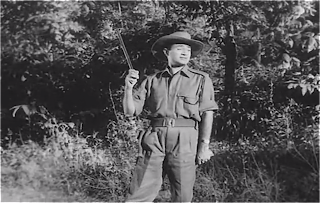 That was the period of Second World War, and hiring for Burma Campaign was going on, there might be some anachronism with the setup & treatment of Army scenes which looked more of the time of China war. But still, Belonging to an army family myself, I could relate to all the setup used by Navketan Production, quite believable and impressive as per that time.The news of Anand joining Army spreads in the town, and reached his Mother, who broke into sorrow & pain of separating from his only hope, his young son, who was going to join army, which was synonym for death in those times. She tried to stop his son, but Anand was firm on his stand. I personally liked all the scenes of Leela Chitnis, an official mother of Dev Anand in nearly all the Navketan banner movies. I mean she had that loving, caring image of archetype Indian mother on-screen, which always touches me, even if some considers all that melodramatic. Well, She was a great actress, Ashok Kumar was a huge fan of her, and often quoted as learnt art of speaking with eyes from her. She is also widely known as first endorsee of popular Lux brand. Again coming back to HD, Anand left his home for eventful Army training experiences and get transformed into more matured gentleman. Then this class masterpiece of Mohd Rafi angelic voice arrives, Mai Zindagi ka sath nibhata chala gaya, which suited well to Anand attitude of moving on with life in the movie. After the song completes, he found a purse of Major Verma, who was his mustache look-alike. He found Maj Verma in Div Head quarters having whiskey with collegues. Initially, everyone thought it's a hangover. Same faces, Same structure, and both in Army, both gelled well right from the start and struck friendship. 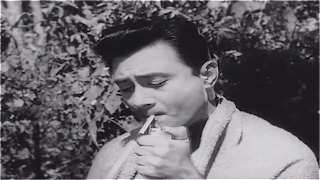 Both shared their respective past to each other, Especially about how they're missing their loved ones amidst military war-life, and then yet another song appeared as a gift to the viewers, "Kabhi Khud Pe Kabhi Halat Pe Rona Aaya".. Marvellous !! Dev Anand maintained the difference  between the two characters so beautifully, Infact his Maj Verma gestures & style was intense and bit funny. Their friendship grew, Maj Verma told everything about his house, wife, etc which later came handy to Anand. During Burma campaign, when Maj Verma was Missing in Action(MIA), he was believed dead, Killed in Action (KIA) during the battle. Anand was asked to convey this news to his family. But on reaching back home, he himself got the blow in form of his mother's death. He remembered his mother words that Army person's mother went mad or died waiting for their sons who never came, and if he'll go she'll never be able to see him again. Anand fall back into memory lanes of grief, and then understood how important is to convey the news of death of Maj Verma to his mother. He left for Major's home right away leaving tensed Meeta behind. 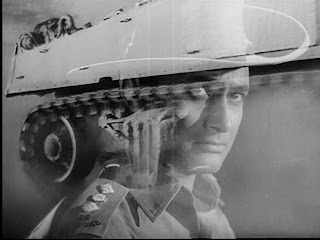 One of the other unique features of Dev Anand movies was mental turmoil & confused state of protagnist. You take Guide, Kala Bazaar, Gambler, Bombai Ka Babu, or Hum Dono. The protagnist is fighting a psychological war with himself. The hero of Dev Anand movies behave just like normal human being committing sins & crimes himself, and finding redemption from dilemmas, confused between different path to choose, standing at road diverging into two parts. It happened quite in a gripping way in this one also. Major Verma home had already became temple of prayers, especially via Ruma(Nanda), his wife totally heart-broken due to his missing husband. She was praying everywhere for his safety & well-being. "Allah tero Naam" a solo by Asha Bhosle was iconic in all respects. Anand went to Major's house and straight away got misunderstood as Major Verma by his mother (Lalita Pawar)  & wife Ruma. And after seeing the condition of both his mother & wife, he was compelled to hide his identity by the family Doctor too, due to Ruma's weak heart condition. Now Anand was trapped in the web of responsibilities & mishappenings, completely justifying the tensed nail-biting drama. And the twist in the tale comes with dramatic return of Major Verma from the jaw of death, but with a loss of a leg. Problems for Anand became more & more weirder. He was misunderstood badly by Meeta who saw him with Ruma, and now think him as an infidel boyfriend, a cheat. All those friends who were visiting Verma's house since his return, now have a serious doubt over his charachter as he was living with a married woman since past few days just like husband. Though Anand was always smart enough to avoid Ruma's physical inclination towards him, and now he had to prove his purity not just to Meeta & Society, but to Major Verma himself who had already decided to take revenge from Anand after hearing about what happened behind his back. He chased Anand and even tried to kill him, but Anand after overpowering him, described him the real picture and asked for his patience to let him prove his innocence. 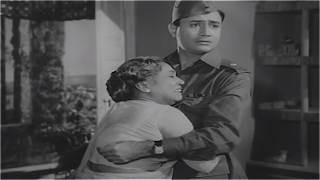 Next day he called Major Verma to the temple, where he called Ruma & Meeta also. And one by one, he cleared the thick air of doubt & mistrust from everyone's mind. And at last, the same trademark melodious tune of Lighter, Meeta's gift for Anand, played. Well what an incredible gift it was, I wish I could have one lighter like that, So what if I didn't smoke ? A gift engrossed with the love of girlfriend like Meeta, is priceless. very recently the movie was screened in color print exactly after 50 years of its release. And why not ? Movies like these can be screened again & again, i have no issues, but remaking them really piss me off. But why should I get angry, Har Fikr Ko Dhue Mein Udaata chala gaya. Gum or Khushi Mein Fark Na Mehsoos Ho jahaan, Mai Dil Ko Us Mukaam Pe Lata Chala gaya. Again seem to influenced from Geeta, a proper state of Stithapragya. And not just this, whether It's Nau Do Gyarah's song -Dard bhi humein Qabool, Chain Bhi Humein Qabool ! Or, Guide, Wahaan Kaun hai tera, and Hum Dono. He have not left any chance to spill wisdom through his movie songs. We need songs like these so badly in Bollywood today. Haina? 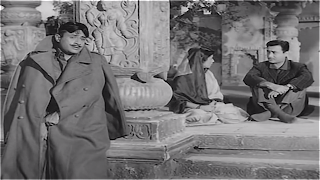 Quite good Gaurav! Great going! Have you read my post on Hum Dono? Here's the link:
http://oldfilmsgoingthreadbare.blogspot.com/2010/05/twin-bonanza.html

Thanks Sharmi !! I read most of your reviews & I'll have to say,You're the inspiration for this blog. So no need to provide any link, If you've written something, I'll be reading it for sure. Keep suggesting me some classics !! It's my favorite past time.