So I have to plunge back to one of my dearest place for erupting cinematic emotions. Long time since my last post on Ghost Writer. I tried writing on various movies but stopped midway not satisfied enough. But then I saw something cinematic-excellence and classy yet equally commercially viable and that too with international appeal. 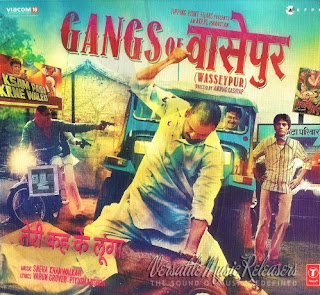 This last weekend I managed to watch Anurag Kashyap's Gangs Of Wasseypur in theatre with my friend and got the motivation to write a post on that. I will not just focus on the film but Anurag's impact on its making too. After a long thought on banking upon a bucket of new generation Directors to trust for quality cinema, finally I have found my pick of all - Anurag Kashyap. I was impressed by works of Vishal Bharadwaj, Imtiaz Ali, Dibakar Banerjee, Tigmanshu Dhulia, Sriram Raghavan, Vikramaditya Motwane apart from Anurag. But they all are good friends and compliments each other in their respective art fields. In fact in Anurag kashyap's own words he use to send his first-cut to last-cut draft of film to all these filmmakers for their take on the finished product, and then he readily accepts their views and opinions also, if he likes. I must say, After reading about this man, watching his interviews, seeing his past works, I can't stop myself from being his admirer, not just admirer but a follower also. This lad has given us films like Dev D, Gulaal, Black Friday & Udaan. All of them has Anurag Kashyap-trademark on them. In his career, he wrote movies like Satya, Shool, Kaun and Academy Award-nominated Water. 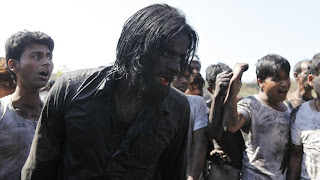 Whether it's Vishal Bharadwaj or Anurag Kashyap, both industry-friends has broken traditional norms of Bollywood and create a niche for themselves. Their choice of subjects and dealing the subjects with pure honesty has won them the hearts of millions. They're creating a great portfolio of films in their kitty year-after year. Initially I used to be confused between Anurag & Vishal to choose as my personal favorite in modern times, but after his new release Gangs of Wasseypur, Anurag has put an end to all my queries. GOW is doing well in India, has got critically acclaimed well, getting a rating of 9.1/10 in prestigious IMDB. It has been chosen to screened in Cannes as well and was well-appreciated inspite of his lengthy duration of 5 hours 20 minutes.

Talking about Gangs Of Wasseypur, It's a great saga of revenge, blood-bath and animosity. The story is inspired from true events of Wasseypur region of Dhanbad in Bihar, it deals with the coal & scrap trade mafia. It's filled with gory sequences and a mix of slang-wit bihari style. So there are dark violent scenes but still you'll be given a situation to laugh and giggle upon. 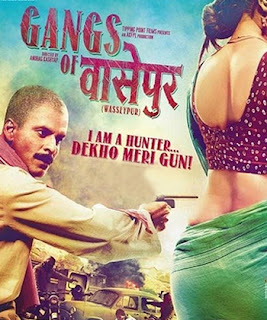 Movie starts with Present-day prologue where Smriti Irani scene of Kyunki Saas..(KSBKBT) opening title-song on TV was airing, which after few minutes get blasted by a bullet, Sultan Qureshi with his gunmen wage a war upon the house of Sardar Khan where aged Farhan ( Piyush Mishra) with the family was inside. They had covered the house from all side and were shooting ferociously to kill each and every living creature inside the house. Finally Sultan called to confirm if anybody's picking the call. When there is no response form inside, they fleed. And story went back to the days of Sultana Daaku in 1941.

Sultana Daaku was Qureshi, Shahid Khan a non-Qureshi muslim of the village impersonates Sultana Daku and started looting grains from trains passing by Wasseypur. And then he used to sell the same in cheaper price than Qureshis. Soon Sultana got to know about the same and he killed all the Shahid-men, and Shahid on insistence of his pregnant wife fled to city where he started working as labour in coal mine. He started working in Ramadhir Singh's mines. One day when a guard stopped him from reaching to his wife in pain of blocked child, he warned the guard that he will dig his grave if his wife or child will be in danger. Ramadhir Singh, an influential owner of the mines let him go to his wife ordering the guard to open the gates. But it was too late as his wife passed away giving birth to his son Sardar Khan. He went back and thrashed that guard till death in a gruesome one-on-one fight. There Ramadhir again saw the courage of Shahid Khan and he made him his henchman for handling the mine-workers. But Ramadhir Singh ordered his killing when one day he heard Shahid Khan's ambition of killing Ramadhir Singh to become the undisputed king of coal mines.

Child Sardar Khan got to know from his uncle Farhan that his father was killed by Ramadhir's men as they got Umbrella of Ramadhir Singh out side their house on the day of Shahid's death. He vows to be bald till he thrash the ego of Ramadhir Singh in a trademark words - Keh Ke Lunga, (I'll tell him, and then snatch his dignity). He started as a driver working for MLA-turned Ramadhir Singh grown-empire of coal and scrap trade business. He started hitting nails to Ramadhir's every wound, first fuel, then forced ownership on his land. In a memorable scene, he slapped and insult both Ramadhir & his son in front of the ACP in police station, asking the commissioner how much he will be sentenced for slapping Minister's son in police station.

He marked his ambition in Jail as an undisputed kingpin of the area, quoting " Sardar Khan naam hai mera, bata dijiyega sabko". He led a carnage of killings for not just Ramadhir's men but even Qureshis of Wasseypur. In the meantime he also took time for his lusty activities in brothels where he get caught red-handed by his wife Nagma, played beautifully by Richa Chaddha. Soon he also feed his lust with a bengali girl Durga whom he married soon. His family was breaking, his sons, specifically Faizal (Nawajuddin Siddiqui) had traumatic childhood seeing his mother wailing and getting closer to his uncle Farhan. He soon divulge into Drugs and smoking, but also imitates Amitabh bachchan due to the fact that his crush Mohsina (Huma Qureshi) was a huge fan of Bachchan.

Time to time, Sardar Khan establish the fact keh-ke-lunga to Ramadhir Singh in various occasions. Once he carried a band outside his home and insulted him publicly on account of a girl of his area got kidnapped by four guys of his pace. The Band played 80s popular Kasam-paida-karne-wale-ki along with some-real hilarious dancing. Once when his son got injured by Ramadhir's men. He again looted Ramadhir's dignity by breaking every part of Ramadhir's car in fron of him. Ramadhir was disturbed by the repeated attacks on his dignity while Sardar Khan also destroyed the rule of Qureshis in Wasseypur waging a war of bombs and desi-kattas on butcher Qureshis who were not accustomed to modern weapons. He killed many Qureshis, burnt many houses, Sultan Qureshi turned thirsty of Sardar khan's blood. And Ramadhir used this venomous bonding of the duo to great advantage. Now he'd employed Sultan to take on Sardar Khan. The characters are so well-written by Anurag, it feels like an epic drama.

The Film ended with Sardar Khan attacked by Sultan and his men gunning down his car to the pieces. Sardar Khan was showed rising up again soaked in blood and gun in his hand to justify the background song, Jiyo hi Bihari ke lala, ....Film first part ended here turning viewers thirsty for more. This film as critics said demand complete attention and can be seen multiple times to explore the nuances of characterizations and plotting of Director. A great effort from Kashyap and his crew especially Manoj Bajpai and Tigmanshu Dhulia donning their roles perfectly. Eagerly waiting for release of second part when as people are saying Nawazuddin Siddiqui would take the front like Michael Corleone in Godfather.

The scenes in the movie are made so real, that it gives you the feeling of watching reality of Bihari terrain through window pane. Infact, Anurag kashyap didn't gave the scripts to many actors involved in the movie till the very last moment in order to generate their natural emotions. I will discuss two scenes in particular, one where Sardar Khan(Manoj Bajpai) is trying to kill one of the Qureshis with knife, that scene has been shown so real where Manoj Bajpai actually got tired of Stabbing him, mowing down him with his jeep to ensure that he's dead or still alive. Another scene where Sultan visits Ramadhir Singh's home and Ramadhir tries to be courteous by offering him to sit with him, and not on floor, which was strange for a MLA from Bihar. But when he asked his mother to arrange lunch for Sultan also, She asked whether to use those Bone china utensil for him, and Ramadhir rotate his head in a shrugging approval. So real, I mean no director can came that close to face the reality. I hope you all have understood the point.

Anurag Kashyap has did it again, he has silenced his critics again. I'm also eager for his upcoming co-production with Danny Boyle - Bombay Velvet & his dream project Raj-comics character DOGA.

Simply awesome. Anurag Kashyap has done what the KHANS, KUMARS, KAPOORS, CHOPRAS could not do in the last 5 decades of Indian Cinema...Great watch.. Loved the second part more..now thatz how a sequal is made....

in túi giấy giá rẻ Printing Paper bags are one of the photos of small cost ads that often are supported by companies. Because when printing paper bags for storing clothing, cosmetics, promotional gifts. They often print the logo and company name for marketing to promote the images because customers often keep them a beautiful paper bag template for shopping or traveling later. Understand everyone's psychology. Clothing equipment often takes the image of the company to customers. They then went to printing companies to put bags in bags for clothing stores. Products like perfume, cosmetics, clothes, shoes, etc. When placed in the appropriate paper bag, the value and professional will be increased.

When printing paper bags so that if you want to focus on advertising, design ideas need to be creative, going from simplicity to luxury will always be appreciated by prospective customers.