Acting is false, Singing is truth..."
Great Lines by Kishore Da Vinci Kumar, when asked about his favorite interests- Acting or Singing. 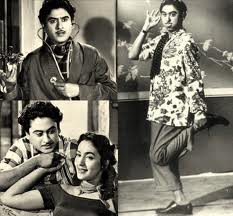 Taking the characters study forward, today I would like to study one of my favorite all rounder artist, legendary Kishore Kumar. Well you must be wondering who doesn't know about this interesting & jack-of-all trades creative man. But I'm talking about the influences of this man in my upbringing & my family roots.
From the very beginning I've been surrounded by people totally crazy and mad about his histrionics. My Father used to have a lot of respect for this man multi-dimensional creativity, and he use to tell me stories about how Ashok Kumar use to demotivate Kishore about his acting and singing skillset. And how Kishore proved him wrong by his sheer talent and determination. I was impressed from this guy from that very moment. As I found a personality to represent my anguish. How? As Kishore was also the youngest brother of three- Elder ones being Ashok & Anoop. And his capabilities were also doubted by his brothers also like me. Even my elder brothers use to make fun of me when I was small. And therefore, Now he was my Icon !
But to be honest, my attachment with him grew leaps and bounds due to my Uncle Rajiv & brother Vishal overwhelming appreciation for Kishore. They were crazy about him, probably more than me. They were a kind of Kishore Data Collectors, have all the details about him, had procured all the songs and movies of him. And through their craze I got to know him further. Yes, he was a legend. Most of my friends only knew the singing side of Kishore as he was the singer of YOUTH, and will always be. But for me, he was more than a singer. He was a comedian, a sensitive actor, a music director, a lyricist and a great human being. One more thing about him, which was equally nostalgic, notorious & lovable was his madness. He was so damn unpredictable. I can narrate his strange behavior stories all day, and the space would be less for that. 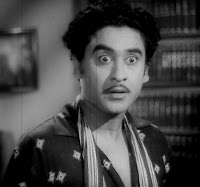 But I would like to quote some of the incident. Like Kishore had a board hanging outside his flat- BEWARE OF KISHORE ! Wow, what an attitude. Once a director paid his half remuneration, and to protest about that he wore the half makeup and clothes for film shoot. The list of his craziness is so long- Like he made G.P Sippy chase him to Madh island fort from his home just for fun, Short hair look surprise to Hrishikesh Mukherjee, Stand-on-the-table in nicker demand for SD Burman and many more. I'm also a bit crazy like him, my brother use to reinforce this fact over & over again. Also my close friend sometime doubt my senses whenever I tries to inject some serious dose of philosophy into their tired veins. So I can relate with this annoying trait of Kishore also. And yes even I'm unpredictable at times. Whether it's Lata Mangeshkar first impression of eve-teaser chaser, or 6-7 months long prank of Manas-putra (imaginary child) incident with Asha Bhonsle, he was always equally adorable in terms of his real-life comic timing. 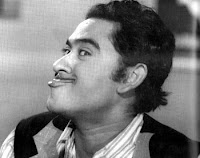 But even after all these so-called flaws, he was a great human being, fact which his many collegues put forward all the time, whether Rajesh Khanna, Amitabh bachchan or Pran whom he worked for very long time. Everyone was influenced by him. So who he was ? An Artist, Yoodler,  Joker, Playboy,  Paranoid or a great philospher. He was also known for his romantic connection with heroines. It was so easy for Kishore to impress girls, and he do have beautiful wives like Madhubala, Leena Chandarvarkar & Yogita Bali. I would say I've been a loser in this case, I've been unlucky in case of girls. But yes, I'm a good human being like him, as people believe of me. He died in 1987 when I was born, I know this is quite a faulty way to connect with a legend. I've the same voice quality like Kishore, now that I can bet, I can match to his tone easily, but yes, melody & yodeling like him is a faraway game to me. 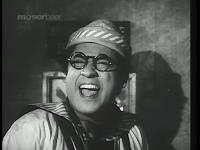 He was impressive yes, But who were the Icon of this icon. Two names which I would like to point out are the foremost K.L Saigal, his god of music & the foreign connection, Jimmy Rodgers. Yeah from where he picked up his yodeling trickery. He use to yodle the same way as Rodgers in his bathroom to the amazement of family members. However, the similar way he impressed the film industry people coming to his home due to Ashok Kumar's Filmy connection those days, by his classic imitations & interpretations of K.L Saigal voice.
Once, he quoted so well about his popular madness by saying, " If they strongly believe that I'm mad, why not have a fun out of this"
I would request everybody to watch his Half-Ticket, New Delhi and other movies to gauge his crazy acting talent. All comedians and artists of that period has similar belief that Kishore was different from one & all. Infact, comic artist Mukri once said, " We all are creating situational comedy, but this man require no situation, as his FACE works so well. "  And he goes on to vouch that after Charlie Chaplin, Kishore was the greatest comedian artists of the world with his impeccable expressions & perfect comic timing.
HAIL MADNESS ! HAIL KISHORE !
Movie Half-Ticket in 15 Minutes...
Posted by Gaurav Rhyme at 12:47 PM

Like the way you told the story...impressive...But you will never match the voice of great Kishore Kumar

I agree....not in million years....It's just a part of comforting myself of some similarity to the idol...